What happens when most of the people in a country are malnourished?

The country will not grow.

To make sure the citizens keep healthy and fit, government agencies release dietary guidelines to guide people to eat healthy.

In this article, I will discuss this visual dietary guideline.

What is the Food Pyramid?

The food pyramid or nutrition pyramid is a triangle-shaped graphical representation of the number of different food groups that we must consume to stay healthy. [1]

In other words, the food pyramid is a visual representation that is used to explain how to achieve a balanced diet. [2]

Due to the Covid pandemic, more people are aware of the benefits of healthy eating. 😷

But most of the time, we make the mistake by only looking at whether a single food is healthy or not.

But we must analyze foods within the framework of a healthy diet, not the food alone. 🥗

Also, sometimes it is difficult to establish how many times a week a particular food is recommended. Or if a group of foods should be consumed every day.

The food pyramid helps us with these situations.

One of the resources to promote healthy eating is the food pyramid. 🔺

Public health organizations need to promote good eating habits, and the pyramid is a simple, graphic and visual way to achieve this.

The food pyramid aims to provide the population with a series of basic tips on what to eat in order to establish a healthy eating pattern.

Over the years it should change based on the latest nutrition research and to better adapt the lifestyle of the population.

After that many countries publish their own version for their public.

For example, the food pyramid was introduced to the US by the United States Department of Agriculture (USDA) in 1992. It was also called “Food Guide Pyramid” or “Eating Right Pyramid”. [5]

The food pyramid or food guide pyramid is a global tool. 🌎

Almost every country has their respective food pyramid or a visual dietary guideline.

Because each country has different nutritional goals and different food habits.

Also, countries’ own food guide pyramid makes it easier for the population to follow the instructions of the pyramid.

Because that contains foods that the entire population knows and can easily acquire.

USDA’s first food pyramid in 1992 attempted to express the recommended servings of each food group, which previous guides did not do.

The food guide pyramid is divided into 6 food groups:

They are the base of the pyramid and provide the maximum amount of carbohydrate necessary for daily energy needs.

According to the food guide pyramid, it is recommended to eat grain-based foods between 6 to 11 servings daily.

Make sure your cereals and grains have labels claiming 100 percent whole-wheat, so your body receives the benefits of fiber. Look for bread that has 3 grams or more of fiber per slice.

They are found in the second level of the food pyramid along with the vegetable group.

They provide the most number of micronutrients like vitamins and minerals for our daily needs.

A serving of fruit is:

According to the USDA’s food guide pyramid, we should consume 2-4 servings of fruit every day.

They are found in the second level of the food pyramid along with the fruit group.

They provide the most number of micronutrients like vitamins and minerals and fibers for our daily needs.

A serving of vegetables is:

According to the USDA’s food guide pyramid, we should consume 3-5 servings of vegetable groups every day.

If you do not have time to cut up or cook raw vegetables, go for frozen or low sodium canned vegetables.

This group is placed at the third level of the food pyramid along with meat, poultry, fish, dry beans, eggs & nuts.

A serving of dairy foods is:

According to the USDA’s food guide pyramid, we should consume 2-3 servings of dairy groups every day.

For dairy products and recipes that use them, choose skim or 1 percent milk and soft cheeses such as cottage, ricotta, mozzarella, parmesan, and Neufchatel. They have less saturated fat, so it doesn’t clog your arteries.

This group is placed at the third level of the food pyramid along with the milk, yogurt & cheese group.

A serving of meat or meat substitute is

According to the USDA’s food guide pyramid, we should consume 2-3 servings of meat or meat substitute groups every day.

Keep in mind, moderate portions of meat will leave more space on your plate for cancer fighting fruits, vegetables, and grains.

They were found at the top level of the food guide pyramid.

Fats and sweets should be eaten sparingly. They are high in calories and fat.

A serving of fat is:

A serving of sweets is:

The first food pyramid was published in Sweden in 1974. In 1992 the US Department of Agriculture (USDA) introduced a food pyramid in the US, called “Food Guide Pyramid” or “Eating Right Pyramid”. [1]

Food pyramid faced some criticism. For example, grain was placed at the large bottom area. So, many people thought grains are more important than fruits and vegetables. [7]

My Pyramid was first introduced in the US by USDA in 2005. Actually, MyPyramid was an updated version of 1992’s food guide pyramid. [3]

MyPyramid shows that we should exercise at least 30 mins almost daily.

Unfortunately, many people found this even more complicated than the original Food Guide Pyramid. [7]

My Plate was also first introduced in the US by USDA in 2011. Actually, My Plate is an updated version of 2005’s MyPyramid. [8]

“My” continues the personalization approach from MyPyramid. 😀

MyPlate serves as a reminder for healthy eating, not intended to provide specific messages. [9]

One of the main reasons for replacing the pyramid to plate is, we eat on a plate, not a pyramid. So, the image of a plate is much more relatable than a pyramid. [7]

Food Pyramid published by the WHO and FAO

The World Health Organization (WHO) with the Food and Agriculture Organization (FAO) published a dietary guideline to prevent obesity, improper nutrition, chronic diseases and dental caries based on meta-analysis. [10] 📄

The visual representation is similar to USDA’s food guide pyramid.

But there are clear distinctions between types of fats, and a more dramatic distinction where carbohydrates are categorized on the basis of free sugars versus sugars in their natural form.

Some food substances are singled out due to the impact on the target issues that the “pyramid” is meant to address.

There are some other health organizations other than USDA, published dietary guidelines and food pyramid. 🔺

For example, the Harvard School of Public Health (HSPH) introduced a healthy eating pyramid in 2001 which was created by nutrition experts at HSPH. [11]

Visual dietary guidelines make it easier for the general population to eat healthy. 🍲

USDA’s food pyramid is the most famous visual dietary guideline in the world. 🔺

We should follow our own country’s dietary guidelines to live healthy.

Finally, let me give you the answer to some common questions related to the food pyramid.

Who created the first Food Pyramid?

The first food pyramid was created in 1970 in Sweden by The Socialstyrelsen (The Swedish National Board of Health and Welfare). After the price hike of foodstuffs, the Swedish government created this idea with this message “A good, healthy diet at a reasonable price”.

What was before the Food Pyramid?

Does the Food Pyramid still exist?

How many times has the Food Pyramid changed?

USDA’s food pyramid has changed 2 times. In 2005, USDA replaced the classic food pyramid with MyPyramid. In 2011, MyPyramid was replaced by MyPlate. MyPlate is the current nutrition guide.

This article is written by a certified nutritionist and verified by scientific evidence. ☑️

We avoid using tertiary references. Know more about how we ensure our content is accurate and current by reading our editorial policy. 🧐

Following are the references of this article. 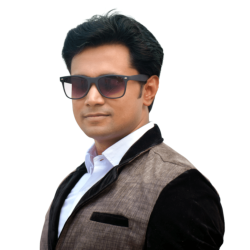 A. R. Choudhury is a IGNOU certified nutritionist in India with a Bachelor’s and Master’s degree in Biochemistry. He also has considerable research experience and additional certificates in nutrition. 👍  Abdur started NutritionCrown in 2020 to organize nutrition information under one umbrella. ☂️  He is passionate about empowering people to make well-informed food choices to support their health. Abdur currently lives in India and keeps fit by weight training and eating mainly home-cooked meals. 💪 🥗

More Articles by the Author
Disclaimer
Content published on NutritionCrown and associated social media pages are for informational and educational purpose only. They are created with the greatest care but are not a substitute for medical advice, diagnosis, or therapy. If in doubt, always consult a doctor or pharmacist. Read more.